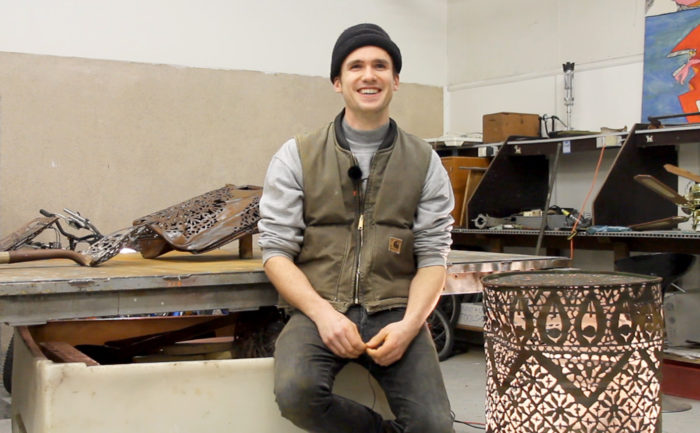 Owen Dixon is a sculptor and a metal worker from Peterborough, Canada, who joined us here at the Fish Factory for January and February of 2018. Owen’s practice is making sculptures out of old, rusty metal objects by cutting holes in intricate patterns to the metal with a plasma cutter. Before studying Fine Arts and sculpting in NSCAD Halifax, Nova Scotia, Owen attended a welding school.

While in residency, he visited several recycling depots and walked along the harbour to collect abandoned rusty steel objects and turn them into artworks that deal with the questions of the past and layered histories of those objects. The cutting patterns also have historical references – most of them are made according to the designs by William Morris of the late 19th century Arts and Crafts Movement.

Besides making his metal work, Owen spent the time in Stöðvarfjörður planning the future projects, making a variety of other artworks and engaging in interesting conversations with others at the Creative Centre.