Anne Klein is a printmaking and textile artist from Chicago in the US. She completed her BFA at the School of the Art Institute of Chicago and is currently an MA/MFA candidate in print media at the University of Iowa. She specializes in woven textiles, illustration, print media, and design for print.

During her time at the Fish Factory, Anne worked on a series of linocut prints drawing on the surreal landscape and idle sleepy scenes of small-town Stöðvarfjörður. Anne’s work typically responds to consumer culture specific to the American Midwest. This moment of reprieve in the eastern fjords was an exciting exploration into Iceland’s vernacular visual language. Anne’s work is underpinned by an open narrative loosely connecting each print as comic panels. She found that depicting these scenes in the stark black and white format of the linocut reflected the occasionally unsettling deep shadows and sleeplessness that came with the midnight sun in the Icelandic summer. 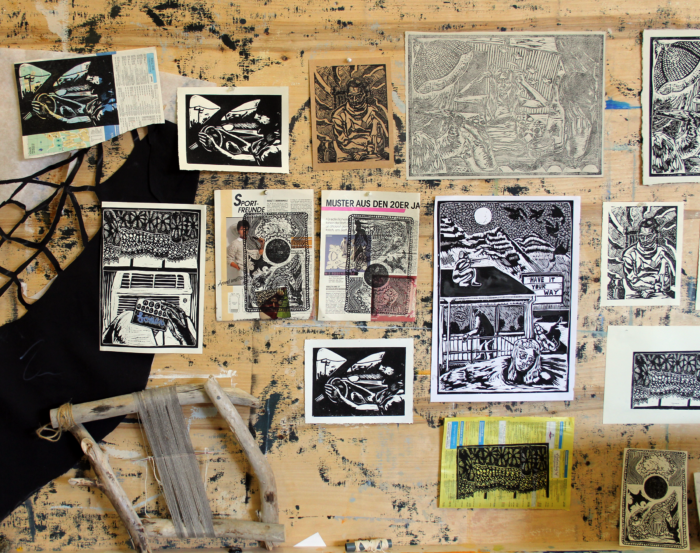 In a turbulent moment marked by social isolation and all-consuming capitalism, I’m desperately clinging to comic relief. My work reacts to a consumer culture of kitsch icons and constructed narratives that have wormed their way into our collective consciousness. I create images of flattened dreamscapes depicting ritual, routine, and repressed memory through allegorical narratives of everydayness. I poke fun at the hellishly mundane pains of everyday life.

I work in printmaking to comment on the value and preciousness of a masterpiece in its singularity. The matrix becomes a symbol of feminine labor, the womb, and me, the imperfect machine of mass production in this mode of making. I am interested in the relationship between maker and consumer; often asking who the artwork is for and who has access to it.