Jessica Woodrow is from England and joined the factory team in the heights of summer in July 2017 and stayed with us into snowfall of December.  Jessica took on the role like a champion and helped us running the factory with humor and determination. 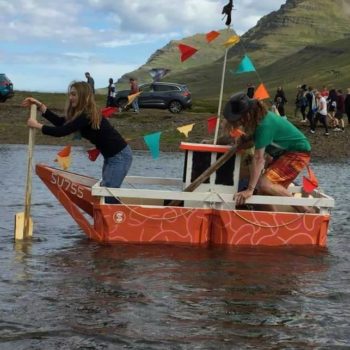 During her stay she earned her self the nickname Captain Jess as she headed our team to victory in a thrilling raft competition during Pólar festival 2017.  She also teamed up with us in painting and fixing up concrete damages on the Silo tower of the factory, which was nothing short of a massive undertake.  Along with our volunteer Coco she renovated a new artist house for the factory and they also saved a duck from an oil spill by giving her a thorough cleaning. That duck was named Shell and in our best knowledge lived a happy life after the ordeal.

There is a Icelandic saying, “að eiga sér hauk í horni” and it roughly translates as “to have a hawk on you side”, meaning that you have an ally or a helpful person beside you. And maybe that describes Jess well because she proved to be that hawk by our side and it was truly a pleasure to have her on board.  A funny thing and a beautiful side note to this is that during her six month stay we saw hawks on two occasions, and that is a rare sight to see.