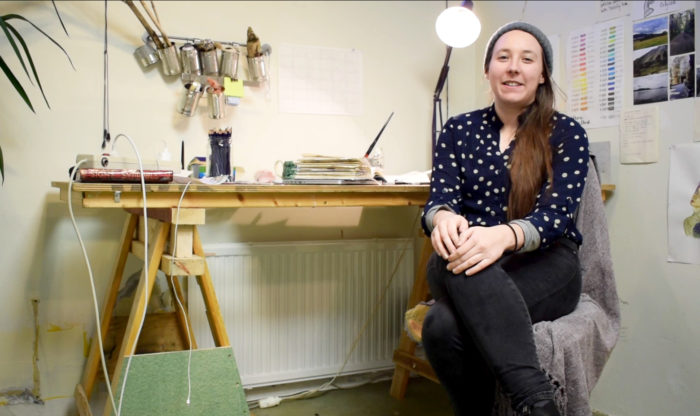 Hannah Bengtsson is an illustrator and a designer from Brisbane, Australia. She stayed here at the Fish Factory for six months from August 2017 to January 2018. Hannah studied in Billy Blue College of Design in Brisbane where she received a BA in Communication Design in 2016.

Since then she travelled to Quito, Ecuador to do design work for her brother’s brewery there and to complete a mural project. After the time in Ecuador Hannah spent months travelling around North America and Ireland before arriving in Iceland and Stöðvarfjörður.

After years of studying and doing design work, Hannah decided that she wanted to engage herself in a massive personal project in which her interests in illustration and writing stories would collide. She wanted to challenge herself and work on a project she could fully devote to. So she ended up working on her own book that is going to be a mix of a graphic novel and an illustrated book.

Hannah spent the time at Fish Factory working hard with her project. She was mostly developing and writing the story and making a lot of illustrations. During her long stay in here, she also worked with many side projects importance of which she talks about among many other interesting topics in the interview.

Selected illustrations for Hannah’s book and a side project embroidery work on a leather jacket.

Check out the interview about her stay here: