The project I began during my stay in Stödvarfjordur uses a transdisciplinary approach to explore the concept of a portal: How do portals perform a queer warping of time and space? What does it look like to inhabit their liminality? And in doing so, how can we lend agency to ephemerality? Throughout history, what tangible shapes might portals take, and what can we learn from them?

Through this research, I became fascinated with green screen technology. A green screen is an object with a physical presence. But before you put it to “use” (i.e transmit an external image) it carves out a space that can only be defined by its ability to represent something else. Perhaps even anything else. In doing so, I am interested in the ways a green screen can act as both an affective and aesthetic reference to a portal. A portal that can be lived inside of, rather than utilized only to traverse from one location to another.

Over two months living in Iceland, I knit green screen sculptural forms meant to evoke portal objects from Norse mythology: Odin’s nine teleportation rings, a bridge between heaven and earth, and a pair of sacrificial pants made from human flesh. My stay at the fish factory provided me with the space to both develop concepts and create tangible materials to further utilize in my practice. 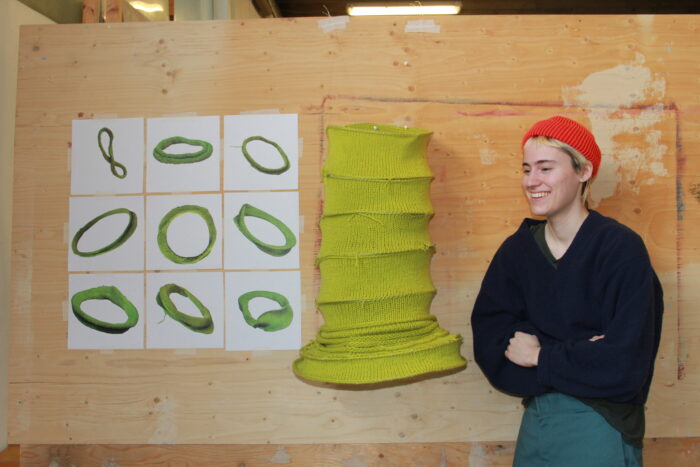