Jane Affleck is a PhD candidate, instructor, writer, editor, and artist from Canada who was at the Fish Factory Creative Centre for the June 2017 residency.

Although Jane completed a bachelor of fine arts in 1995, this was her first artist residency. For a couple of years after completing the BFA, she shared a studio with two other painters and produced a series of large-scale, realistic paintings with an environmental theme (using “found” insects, mainly bees, as models, she would paint them flying through invented landscapes or cloudscapes).

However, she shifted her focus to studying literature and writing, and in 2007 completed a master of arts in English and creative writing. Around this time, she began to work on a series of simple, almost “cartoony” drawings based on memories of strangers seen on the metro (Montreal’s subway system), writing short prose pieces to accompany them.

Since moving to Ontario in 2014, she has been working on a similar series of drawings of people seen on the subway or streets of Toronto (with no accompanying prose). In April 2017, four of drawings from this ongoing series were exhibited in a group show.

Since 2012, Jane has been teaching courses about comics history and contemporary graphic novels at NSCAD University in Nova Scotia, Canada. One is a survey-type course that considers historical and contemporary work in France, North America, and Japan. The other focuses on approximately 1,000 years of Japanese visual culture, with a few weeks examining the diversity of contemporary “manga” (Japanese comics).

Researching and teaching these topics have influenced Jane’s approach to creating art (practice what you preach!). In January 2017, she began a “graphic memoir” (a comics-style autobiographical work – Alison Bechdel’s Fun Home is an example of this genre); while at the Fish Factory, Jane continued working on this project. The memoir is based on her experiences as a single woman owning a house in Dartmouth, Nova Scotia. The working title for the project is The House that Jane Bought: A Cautionary Tale for Single, Ambitious Women. Themes in the work include feminism, capitalism/consumerism, privilege, race, and colonization. When she bought the house, she saw it as confirmation of her independence and self-sufficiency as career-focused woman who had finally achieved some kind of capital-S success. However, she soon realized that instead of being subject to landlords (and roommates), she was now at the mercy of the city and developers, and even neighbours: from an exponential property tax increase, to proposals for development projects out of scale with the neighbourhood, to neighbours partying all weekend. Two years later, she started her PhD in another province, so rented the house to tenants. It was at this point that issues around privilege and race entered the picture, which also (in part) led her to think about colonization, and about Canada as a colonial nation-state that perpetuates a settler-focused narrative about its founding. This project thus presents a kind of counter-narrative critique, from the perspective of a white female settler of some privilege, of the current socio-political situation in Nova Scotia in particular, and in Canada more broadly.

While at the Fish Factory Creative Centre, Jane completed an additional 21 pages of this work – fewer than her goal of 30, but nonetheless motivating her to continue working on this project (she has completed a total of 38 pages and hopes to finish another dozen or so by the end of August 2017). She found the Fish Factory and the town of Stöðvarfjörður ideal settings in which to focus on her project: the shared studio facilities meant opportunities to discuss work in progress with other artists, while the beautiful mountains of the surrounding fjord allowed her to experience nature in meditative solitude (and to get a different perspective on the project and life in general!). Takk fyrir! 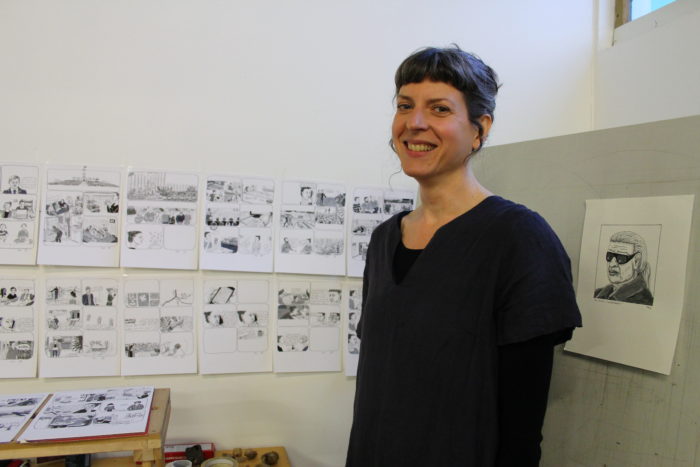